An Eye Scan Could Detect the Risk of Early Alzheimer's 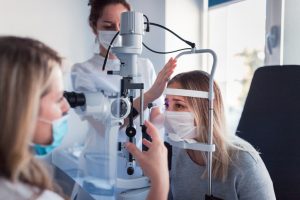 Does the eye provide a window into early brain changes? A new study published in JAMA Ophthalmology suggests a simple eye test could help diagnose Alzheimer’s disease in earlier stages.

About 6.2 million Americans over age 65 live with Alzheimer’s dementia, a progressive disease that destroys memory and other critical mental functions.

Alzheimer’s disease and dementia are usually diagnosed when people become forgetful or act out of the ordinary. Traditional MRI scans can help doctors detect Alzheimer’s disease but not in the early stages. More advanced MRI scans can help detect the disease in earlier stages; however, these are still investigational, and this type of imaging would be costly. Experts say retinal deterioration may reflect changes in the blood vessels in the brain, which could play a role in the development of Alzheimer’s.

Previous research suggests people with thinner retinas are at risk for memory and reasoning problems. Researchers from the University of Otago in Dunedin, New Zealand, recently investigated the retina’s ability to indicate brain changes earlier in life.

“In the near future, it’s hoped that artificial intelligence will be able to take an image of a person’s retina and determine whether that person is at risk for Alzheimer’s long before they begin showing symptoms, and when there is a possibility of treatment to mitigate the symptoms,” said Ashleigh Barrett-Young, PhD, Research Fellow at University of Otago (Medical Xpress).

Although further research is necessary to determine whether a thinning retina can indicate Alzheimer’s, this study provides hope that optical scans could assist in predicting cognitive decline.

The eye doesn’t just provide a window into early brain changes. It is an indicator of overall health. Yearly eye exams can diagnose many common eye diseases like glaucoma and macular degeneration, which can cause irreversible eye damage. An eye exam can also help detect chronic conditions like hypertension, diabetes, heart disease and high cholesterol.

When is the last time you scheduled a comprehensive eye exam with dilation? Getting annual eye checkups can also diagnose cataracts, a common vision problem. Most people over the age of 40 have a developing cataract. The good news is that cataract-related vision loss is treatable through cataract surgery, a safe, routine procedure.

Contact your ophthalmologist to schedule an appointment for an eye exam for you and your family members. There is no substitute for healthy vision, so call today.